This calendar page highlights all important gaudiya vaishnava events that fall in current month. You can view events in upcoming months and years using the navigation below. Click on events for more details. 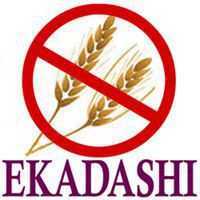 Varuthini Ekadasi most mercifully descends in the month of Vaisakha (April/May) and is described in details in a conversation between Sri Krsna and Yudhisthira Maharaj. Once upon a time the sublime king Yudhisthira asked the Lord: "Please explain to me the process for observong this Ekadasi which takes place during the waning Moon in the month of Vaisakha. What is the process for observing this Ekadasi and what results may be obtained by such practice."

Lord Krsna replied: "My dear Raja (king) the name of this Ekadasi is Varuthini and it awards one greatly intrinsic fortune, both in this life and the next. By following the vow of Ekadasi one obtains perpetual happiness and his sinful reactions dwindle as of a dimminuendo. By following such a vow an unfortunate wife grows fortunate, a lame man may leap and a blind man see. A human being attains prosperity in this life and the next, and even without realising so; an animal may be liberated from the cycle of birth and death. Many saintly kings such as Dhundhumara and Jambhudra became liberated by following this delectable and most transcendent of days… Varunthini Ekadasi."

"O great king! Donating an elephant is superior to donating a horse, donating land is superior to donating an elephant and donating sesame seeds is greater than donating sesame seeds and donation of food grains is greater than donating gold. In fact there is no greater charity than donating food grains in charity. By such munificence one can satisfy the forefathers, the demigods and all living entities. The learned scholars have recorded in their Vedic legacy that, giving a daughter in charity is equal to giving  grains in charity. The Supreme Lord Himself has compared donating food grains to be equal in stature and benificence to donating cows! Moreover, among all kinds of charities sharing one's knowledge with others is the highest.

"By following Varuthini Ekadasi one can attain the results of all charities. A person who earns his livelihood by cowardly selling of his daughter, deserves to live in hell untill the end of time. Therefore no one should ever accept wealth in exchange for his daughter. A householder who, under the influence of greed sells his daughter in exchange for money becomes a cat in his next life. But one who decorates his daughter with beatific ornaments according to his own capacity and gives her away in all good faith to a qualified and chaste groom, even Citragupta-the secretary of Yamaraja, is unable to count his piety.

The follower of this Ekadasi should abstain from eating out of a bell metal pot, eating meat, masura gram, chickpea, spinach, honey, accepting foodstuffs cooked by others, eating more than neccessary, eating more than once and engaging in sex life from the day before Ekadasi. He should not engage in gambling, sleeping, eating betel nuts, brushing his teeth, blaspheming anyone, gossiping, speaking ill truths, speaking with a sinful person, becoming angry and telling lies on the day of Ekadasi. If one observes the Ekadasi day in this manner with great tenacity and determination, according to these reglatory stipulations-all his sinful reactions will be completely annhiliated and he will attain the supreme destination. One who remains awake on the day of Ekadasi and worships Lord Janardana becomes freed from all sins and attains the supreme goal of life. Anyone who hears or reads some narration of the inscrutable glories of this Ekadasi surely achieves the result of donating one thousand cows, and being freed from all his sinful reactions he attains the abode of Visnu."

Please note that this vaishnava calendar displays the holy days according to the dates and times for Mayapur, India, the spiritual capital of Gaudiya Vaishnavas. At this sacred place Lord Sri Krishna appeared as Sri Chaitanya Mahaprabhu to mercifully deliver the fallen souls of this age of kali-yuga.